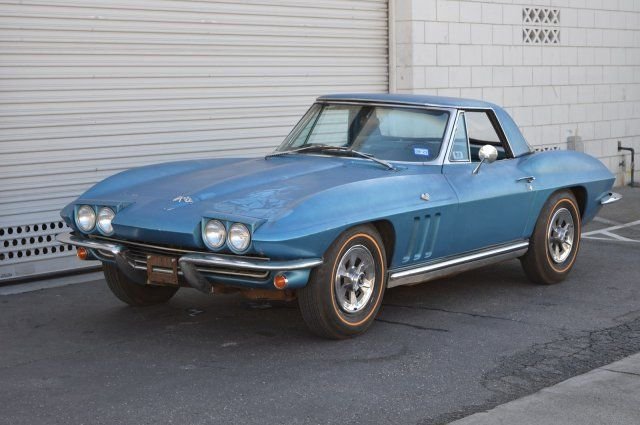 This 1965 Chevrolet Corvette convertible is a reportedly unrestored example finished in Nassau Blue over a matching blue interior and powered by a numbers-matching 327ci L75 V8 paired with a 4-speed manual transmission. Factory options include a Delco AM/FM radio and removable hardtop. This C2 received a Second Flight award from the National Corvette Restorers Society in 2018 and is now offered by American Motors Custom & Classics with over 200 photos, an owner's guide, NCRS documentation, and a clean Texas title. The car was finished in Nassau Blue (FF) from the factory. Fading, cracking and scratches are present throughout as shown in nearly 120 exterior photos below. The matching removable hardtop is included in the sale. Factory 15'' steel wheels wear faux knock-off covers and are mounted with an older set of Firestone gold-line tires. Both retractable headlights are shown open and closed in photos. Blue vinyl upholstery, carpeting, and stock hardware are retained in the cabin and shown up close in additional gallery photos below. The 5-digit odometer shows just over 32k miles. The trim tag located below the glovebox door provides the following production details: G24 -- Produced February 24, 1965 Style 19 467 -- 1965 Convertible Trim 414B -- Blue vinyl Body A-3616 -- A.O. Smith Paint FF-- Nassau Blue The 327ci L75 V8 was rated at 300 horsepower from the factory and is mated with a Muncie 4-speed manual transmission and Positraction rear end. The engine block stamping above reads 111507, matching the last six digits of the VIN. Several undercarriage photos are included in the gallery. The car received an NCRS Second Flight award in October 2018. A demonstration drive and walk-around of the car is featured in the video. Give us a call with any questions. (408)610-1000.

Thank you for your interest!

We'll get back to you soon!